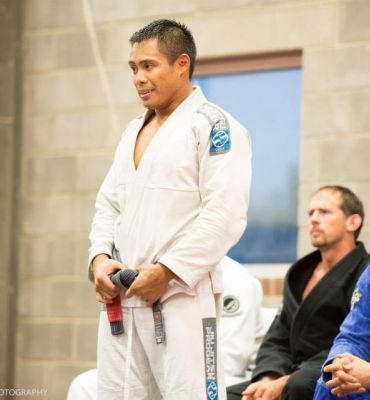 Ray began his martial arts journey in 2002.  He had been an avid weightlifter for several years, but sought to find another physical activity to supplement his weight training.  After researching effective forms of martial arts, he decided that he would try Muay Thai (Thai boxing).  An online search of schools in the Washington DC area led him to Evolve Academy (Linxx Academy at the time).  He enjoyed the classes, and the environment at the academy, and quickly became a fixture there, training every day.

After a few months, some of the friends he had made there started encouraging him to try the Brazilian Jiu Jitsu (BJJ) classes that were also offered at the academy.  He had absolutely no interest in it at the time, but decided to try it just to get them to stop bothering him.  After his first class, he was hooked.  He started training less and less Muay Thai, and more and more BJJ.  BJJ became his new obsession along with fitness and weight training.

After many years and many hours on the mat both training and teaching, Ray was awarded his BJJ Black Belt from Mike Moses at Evolve Academy on June 10, 2011.

During a career transition to become a personal trainer in order to pursue his passion for fitness, he was approached by a friend and training partner from Evolve, Mark Munster, about helping with a women’s self defense seminar in Poolesville.  Ray was interested in helping, but the interest in the seminars quickly grew, so Mark suggested starting a program there.  Ray was on board, and Poolesville Self Defense was open for business a couple of months later.  Ray is excited to bring BJJ to the community in Poolesville, and seeks to help as many people as he can fall in love with the art.

Thanks for contacting us!

We will be in touch shortly.
If you contacted us outside of business hours it might take us a bit longer to respond.